Confronting “The Bomb” in the New Atomic Age

The Soviet Union’s detonation of its first atomic bomb on August 29, 1949, thrust the United States into a new and more precarious era. Just four years after celebrating victory in World War II as the only nation with an atomic bomb, Americans now found themselves confronting the probability of an atomic war.

Over the next decade, the government, through the newly formed Federal Civil Defense Administration, issued posters, pamphlets, and related materials; offered training courses; sponsored civil defense conferences; and worked in cooperation with state and local civil defense entities as well as the private sector to prepare men, women, and children for the day “the bomb” might fall.

Atomic Alert!: Confronting “The Bomb” in the New Atomic Age explores the government’s efforts to educate Americans about what to do before an atomic attack; how to react to a sudden, blinding flash; and what action to take in the aftermath of an atomic blast.

Visitors to Atomic Alert! will:

Featuring artifacts and interpretation from Michael Scheibach, Ph.D., independent scholar and author, Atomic Alert! offers a unique opportunity to revisit the early atomic age when the world was divided between two atomic-armed adversaries: the United States and the Soviet Union.

Atomic Alert! features a large interactive called “When the Bomb Falls,” which allows visitors to explore the impact of a nuclear blast on a geographic area. From the innermost circle, where survival is near impossible, to the outer edges of the blast radius, where the immediate impact is less severe but the threat of radiation from fallout remains. Featuring a large sculptural a-bomb, “When the Bomb Falls” draws visitors closer, all while exploring the dangers of proximity to an atomic explosion. 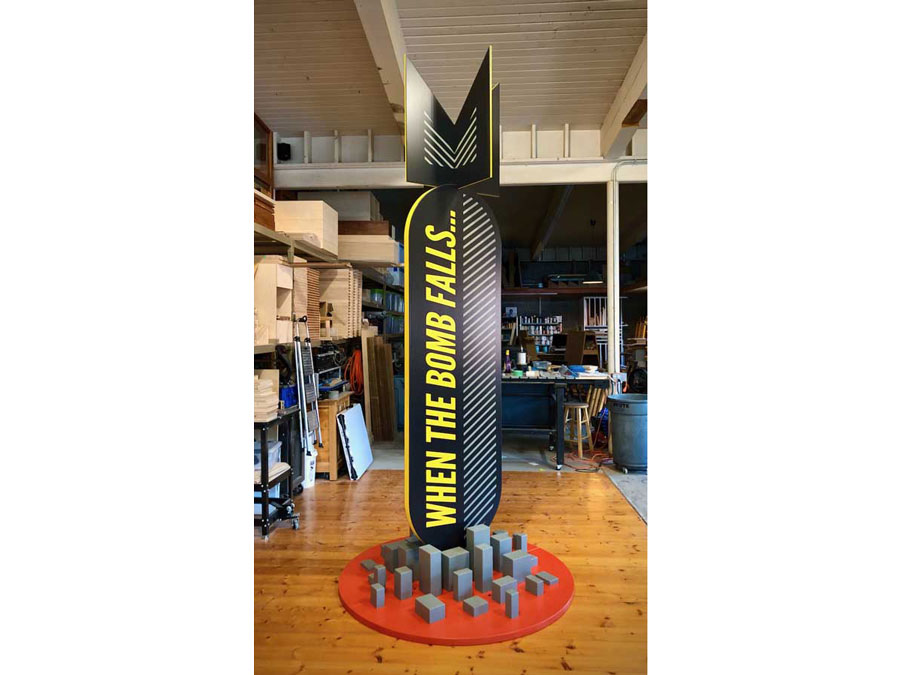 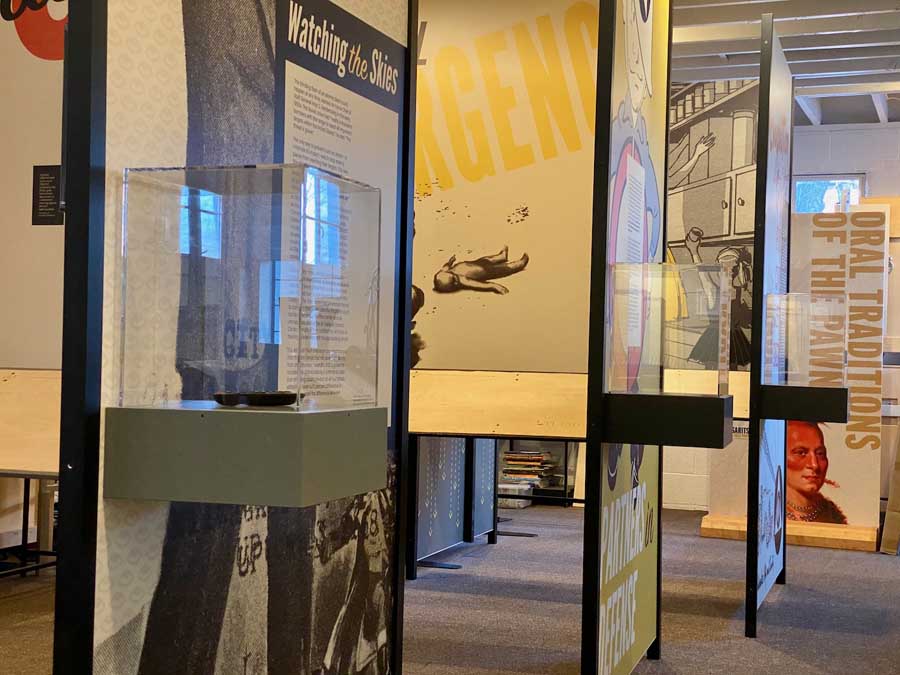 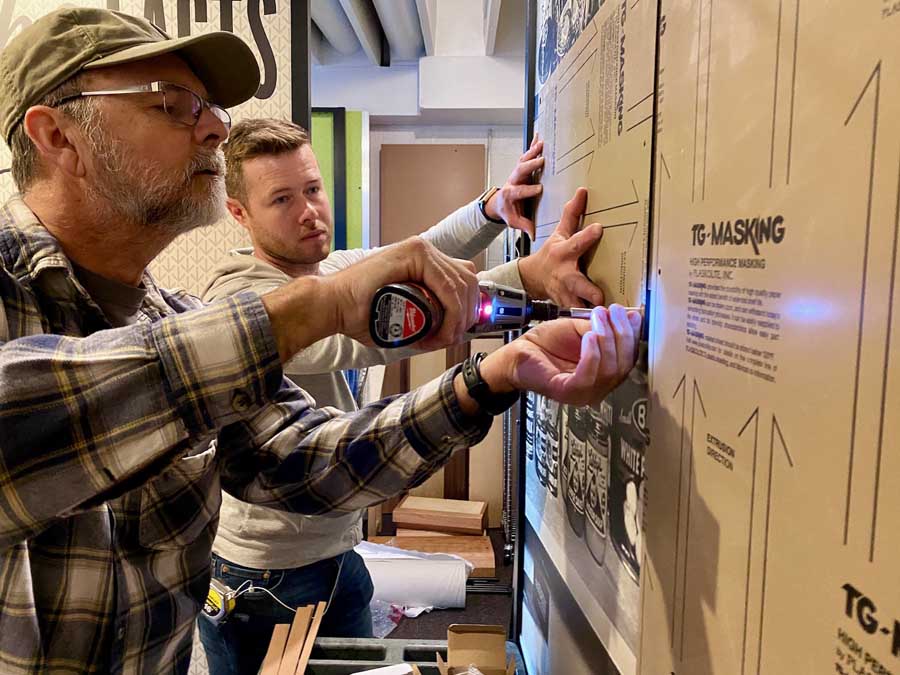 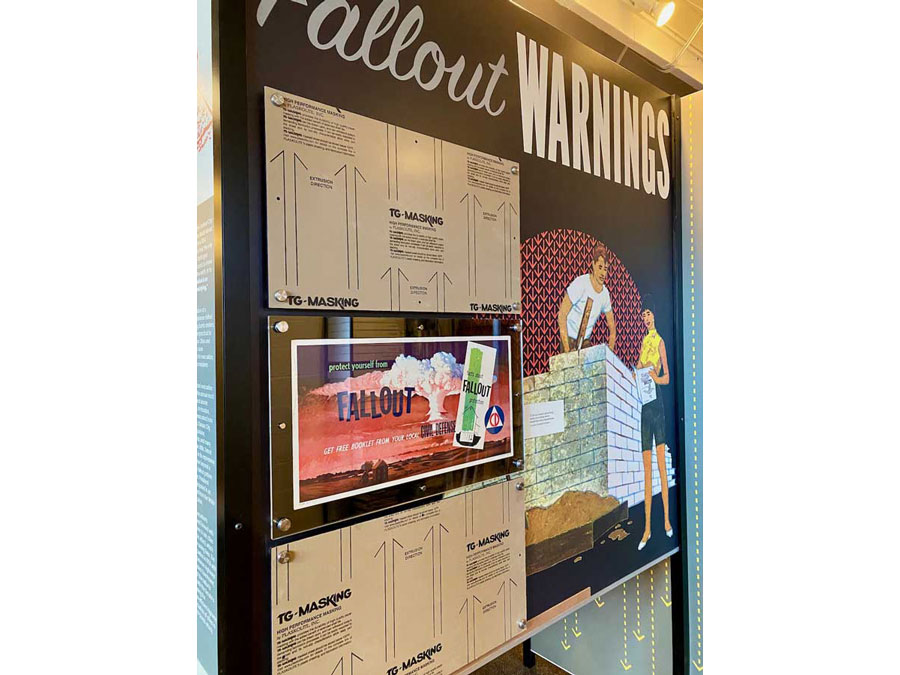 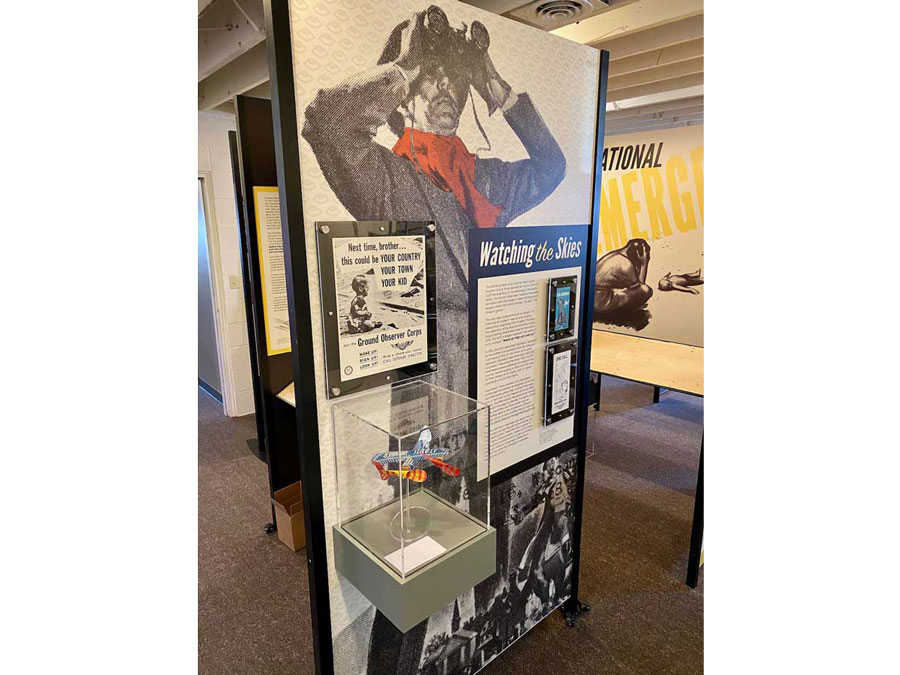 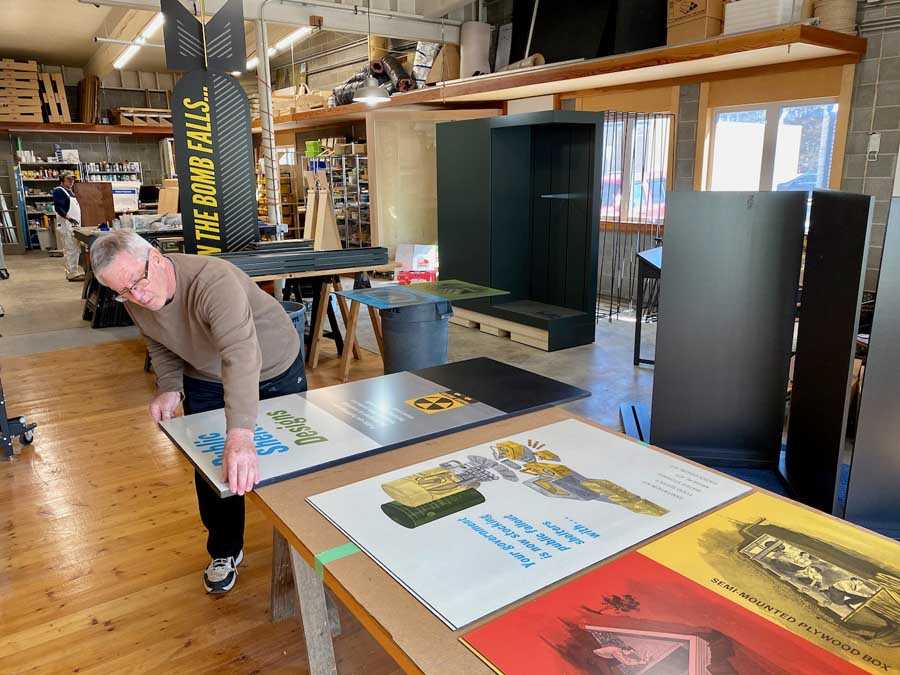 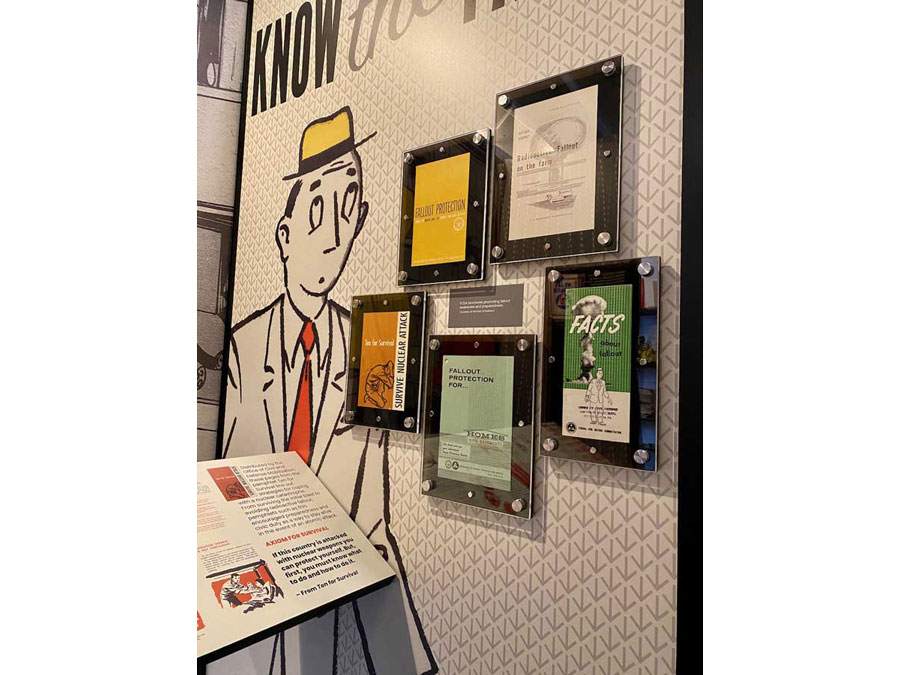 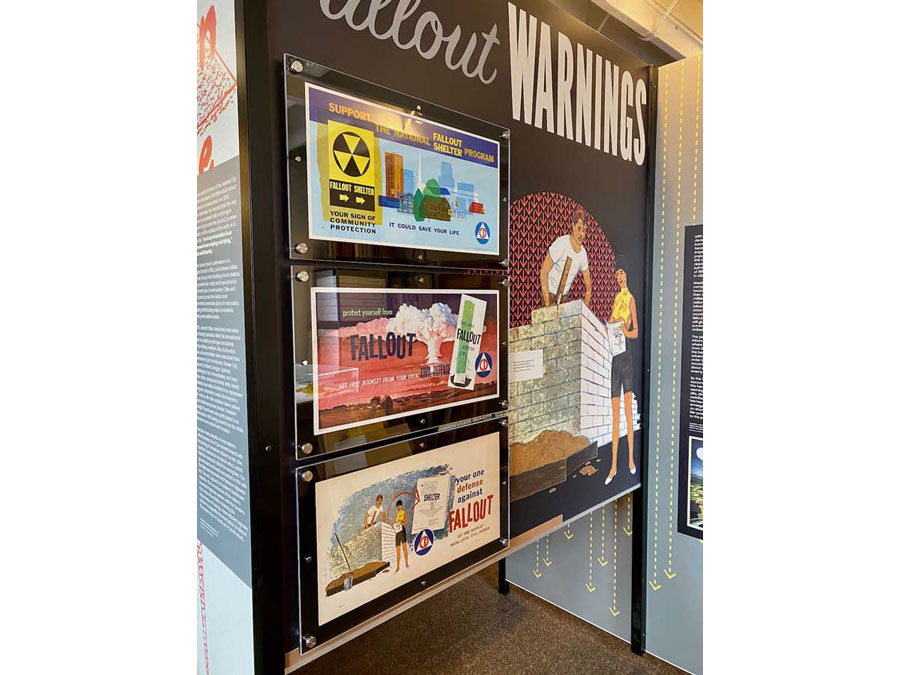 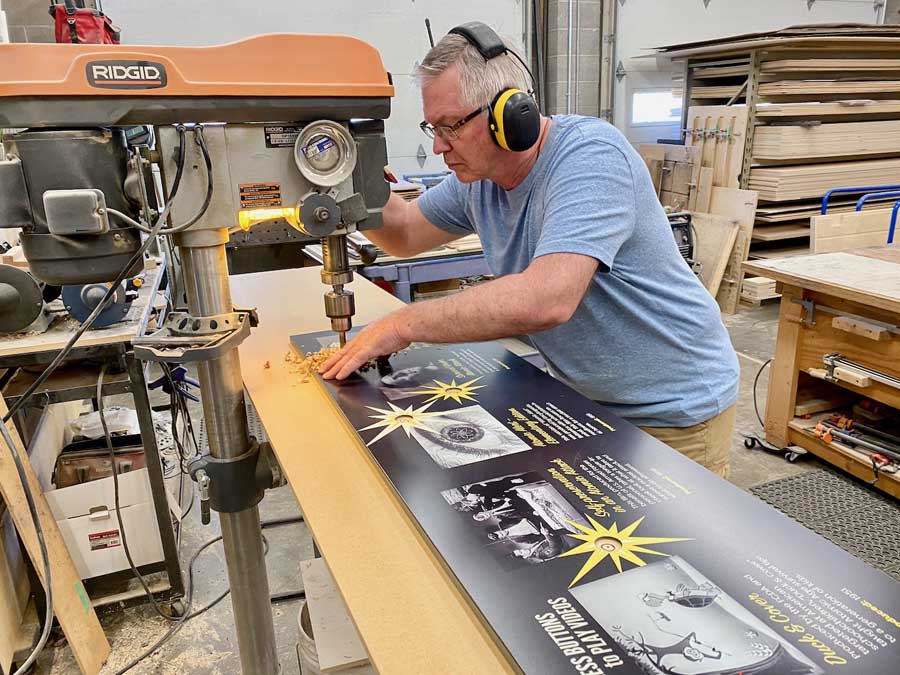 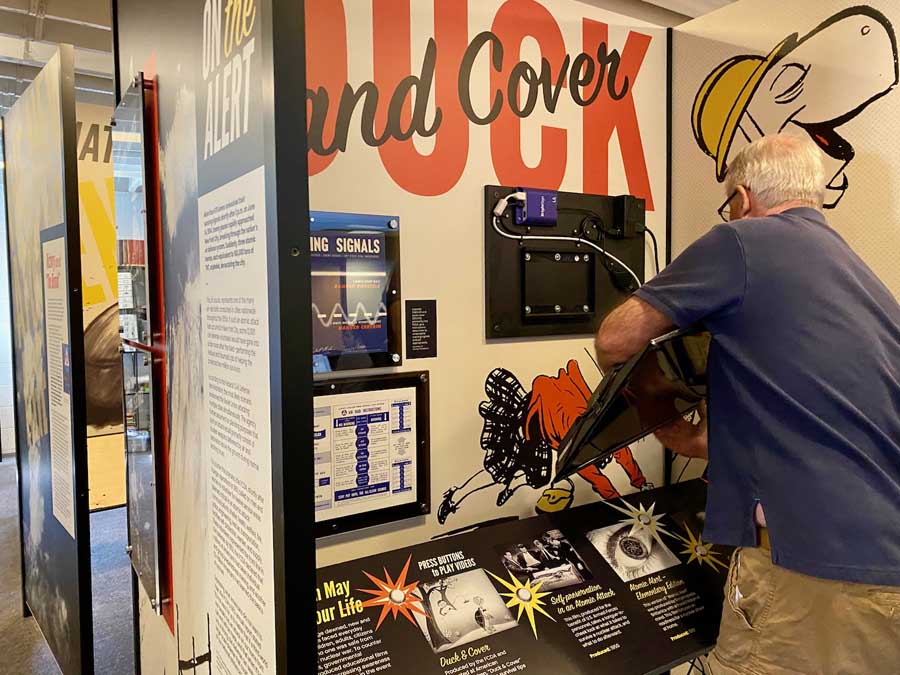 "On the Alert" unit

Atomic Alert! features posters, brochures, stand-up displays, and other educational material produced by the Federal Civil Defense Administration to prepare everyday Americans for the possibility of nuclear war. Hand-picked from the extensive collection of scholar Michael Scheibach, the artifacts evoke what life was like for Americans at the dawn of the Atomic Age.

We deliver and install the exhibit, while you sit back and watch! It only takes a few hours to setup.

We dare you to find a traveling exhibit of this scale that takes less of your staff’s precious time!

Resources to Help You Succeed

The Atomic Alert exhibit comes with a growing list of resources to help you do your job.

You set the schedule. Get a quote.

Schedule a Presentation with the Curator

Michael Scheibach, Ph.D., curator of Atomic Alert!: Confronting “The Bomb” in the New Atomic Age, is an independent scholar specializing in the history of the early Cold War from 1945 through the 1960s. Dr. Scheibach is also a collector of artifacts and is the author of Atomic Narratives and American Youth: Coming of Age with the Atom, 1945-1955; Protecting the Home Front; In Case Atom Bombs Fall; Atomics in the Classroom; Alert America.

Request Quote Get a quote, including delivery & installation.

Thanks to the following institutions for being willing to support this project from the very beginning. We couldn’t have done it without you!